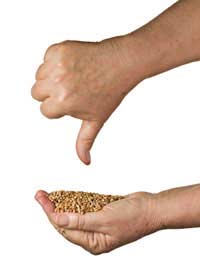 Being given food on prescription seems very odd to most of us, but for many people, the NHS prescription gluten free foods list has been a way to relearn safe eating after being diagnosed with coeliac disease.

What Is Gluten Free Food?

There’s an international standard for gluten-free foodstuffs, which has been created by the Codex Alimentarius, an international body that aims to ensure the health of consumers by defining safe threshold levels for nutrients and risk elements in purchasable foods.

The standard was updated in 2008 and currently offers two labelling categories to help gluten intolerant people manage their diets.

This labelling system is based on the most recent research, which shows that individuals with coeliac disease can eat unlimited amounts of products with gluten at a level of, or lower than 20 parts per million without experiencing any harm.

Who Is Entitled to Gluten Free Food Prescriptions?

Most people who have been medically diagnosed with coeliac disease or another disease known as dermatitis herpetiformis are entitled to gluten-free foods on prescription.

This is because a lifelong gluten-free diet is the only treatment on offer for either condition – as a result, straightforward and guaranteed access to a reasonable range of specially formulated gluten-free products is considered vital to allow those with the conditions to maintain their diets.

Many people are entitled to free prescriptions but for those who are not, a prescription season-ticket may be the most cost-effective way of obtaining gluten-free foods if they have a suitable medical diagnosis.

In addition to the ruling on who is entitled to prescription gluten-free foods, there are a range of guidelines covering appropriate prescriptions rates for different population sectors, but there are no rules in place to govern what GPs can prescribe for NHS patients.

These figures may seem unusual to the non-gluten-intolerant consumer, especially the amount of bread on offer, but this is because so many other forms of cereal based food are simply not suitable for those who have coeliac disease. The definition of loaves includes rolls and crispbreads.