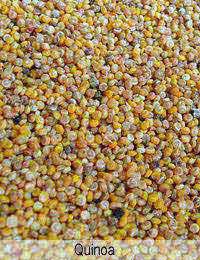 One way to deal with a gluten free diet is to simply work at making substitutions for foods that you’d previously eaten that contained gluten, especially wheat products and by-products, but a more positive way is to see gluten free living as a positive choice and to focus on all the wonderful recipes that have been created just for those with gluten reactions. Here’s a dinner party menu that will leave your guests begging for your culinary secrets, and without a clue that they’ve just eaten a gluten free meal.

This recipe trades the standard stuffing for a moist and sweet citrus based forcemeat that gives a luxurious quality to the traditional roast.

The ingredients for this are approximate because it all depends on the size of your chicken.

1. Boil the quinoa for ten minutes in unsalted water, then drain it and pour a little cold water over the top to stop it cooking.
2. Mix the crushed nuts, fruit, lemon zest and juice with the olive oil.
3. Drain the quinoa again and then fold the other ingredients into it and spoon it into the chicken cavity. Push the stuffing deeply into the bird and then seal the cavity by capping the stuffing with one half of the squeezed lemon.
4. Roast your chicken as you normally would, allowing an extra fifteen minutes to cook through the stuffing.

Perhaps you’re catering to non-meat eaters? Nothing could be easier than cooking a delicious pasta dish from scratch.

Take two tablespoons out of the flour and put to one side. Then beat all the other ingredients together in a large bowl or in the food processor. You’re looking for a firm elastic mixture that leaves the bowl clean so if the mixture is too wet, add some of the reserved flour, or if it’s too dry, add a few drops more olive oil.

Put the ball of dough on a floured surface and knead well for five minutes. Wrap in clingfilm and refrigerate for thirty minutes while you make the filling.

For the ricotta, parmesan and nut filling:

Beat the ricotta with the egg yolk and half the parmesan. Then fold in the nuts, herbs and nutmeg before seasoning with salt and pepper.

Remove pasta from the fridge and cut in half. You should put one half back in the plastic or it may become crumbly. Roll the other half out until it is around 2 mm thick and about 100 mm wide. Lay one out on the floured surface and put a big teaspoon of filling about 50 mm in from the edge of the sheet, repeating the process all the way along and then brushing around the filling with water before laying the second pasta sheet on top of the first.

Press the top sheet onto the bottom one, excluding any air around the filling, and cut each ravioli using a cookie cutter.

Boil a large saucepan of salted water and once it’s simmering, drop in the pasta. They will float as soon as they are ready and you can fish them out with a slotted spoon.

Put in pasta bowls and serve with the rest of the parmesan sprinkled over the top.